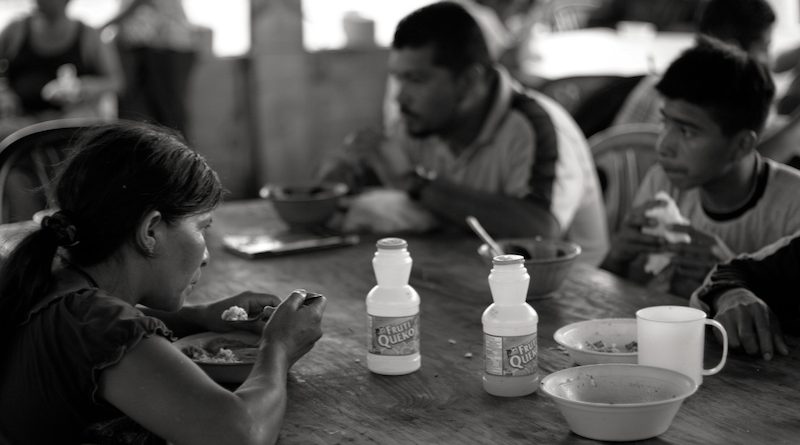 Op-Eds and Commentaries
August 22, 2019August 22, 2019 1609 Views Central America, community organizing, immigration, Mexico, migrants
Thanh Mai Bercher
Thanh Mai Bercher has a B.A. in Public Health from the University of California, Berkeley, where she was a fellow with the Human Rights Center and Blum Center for Developing Economies. She organizes health literacy and access programs for refugees, immigrants, and LGBTQ+ people in Palestine, Greece, and Mexico.

Note: The terms ‘refugee’ ‘migrant’ and ‘asylum seeker’ will be used interchangeably. These terms do have specific definitions, however individuals relate to them differently. While not all migrants may meet the legal definition of an asylum seeker, they may identify as such. For these reasons, groups and individuals will be labeled under a mix of said terms.

Less than half a mile from the U.S. border on a street corner in Tijuana, Mexico sits a small orange kitchen. Like other restaurants on the block, El Comedor typically has a steady stream of people lingering and picking up conversations while music bumps in the background. Yet there is no shortage of things that set El Comedor apart. Run exclusively by female migrants from Central America, El Comedor provides consistent meals and a safe place for migrants to meet. Under the leadership of Gabby, a 21-year old migrant from El Salvador, women have found power and purpose by self-organizing and uplifting their community on their own terms. Within the ongoing struggle for autonomy and recognition throughout the migration process, the women of El Comedor are upending gender hierarchies and leading community-centered efforts for survival.

El Comedor – which translates to ‘dining room’ or ‘the kitchen’ – was born out of the caravan of 5,000 migrants making its way from Honduras to the United States in October 2018. After making its way through Mexico, the caravan was stranded in Tijuana, at the US border. Governmental and policy shifts left asylum seekers in limbo between the U.S. and Mexico, with precarious social services and humanitarian benefits. Incoming donations for the migrants were taken into a guarded government warehouse, where soldiers restricted distribution. Officials refused to speak with the caravan’s self-elected committee and interfered with the caravan’s ability to work with international organizations, volunteers, and local groups. Migrants began to leave the camp in search of other shelter, and the once-unified body was dispersed throughout the city.

In line with the community-based origins of the caravan, 500 migrants chose to stick together and established an autonomous shelter in an abandoned warehouse. Gabby saw an opportunity and vocalized her idea for a kitchen. Although she had never had a formal job or cooked outside of her home, Gabby felt a strong call to action and was able to recruit, manage, and organize people. After working with volunteers to source cheap kitchen supplies and ingredients, Gabby began waking up at 4:00 a.m. every day to cook and serve meals. She appointed women to lead teams responsible for picking up donations, preparing ingredients, setting up cooking and serving spaces, and organizing people to eat. Her leadership gave a sense of structure to those who were anxious about the uncertainty that awaited them outside.

The community-centered approach that the women employed stood in stark contrast to the state-imposed interventions. During meals in government shelters, there were no accommodations for pregnant women, people with disabilities, families with young children, or the elderly. People felt the stress of soldiers’ orders and the often frenzied scheduling of meal times. Families couldn’t eat together and those who were sick or couldn’t stand in line for hours often went without food. The unity the caravan had formerly valued was not possible to sustain within the government space.

In contrast, Gabby and her team created a community-oriented space that allowed people to relax and pass food to others before themselves, knowing that there would be enough for everyone. Elders and pregnant women had their food brought to them and did not wait in line, and families were able to eat in a play space with their children. Men began volunteering to help the teams and Gabby notes that this offer solidified the role of women as leaders within the community.

While the shelter was evicted after a few weeks, the female-led team remained intact. Gabby and her team found a restaurant just a few blocks away and worked with local groups to fundraise money to lease it. They established the kitchen as a continuation of the community caretaking they had provided in the shelter. Their meals didn’t just bring people together; they upended gender hierarchies and expectations. The leadership team is all female, with Gabby and several women serving as head cooks, while their partners play supporting roles. In its functions, the space is as flexible and adaptive as its participants. After only a few weeks of operation, the collective opened a donation center on the rooftop using donated and found materials. The new resources brought in more diners and expanded conversations around the future of the kitchen as a space for community organizing and employment. In a larger sense, it has become a social and economic institution for migrants. When asked about what it feels like to run such an important space with a team of women, Gabby laughs and replies, “I like women being in charge. It’s about time women rule the world.”

The newfound leadership of women in El Comedor is emblematic of the power the new caravan structure has in upending gender dynamics and trends in global migration. Traditional migration routes are secretive and therefore smaller, offering women little visibility and protection from abuse. Sexual and gender-based violence during displacement throughout Central America can deter women from migrating; as a result, men dominate the global migration path. The share of female migrants has not changed tremendously in the past 60 years, and female migrants still face stronger discrimination and are more vulnerable to mistreatment. Sexual and gender-based violence also influences the choices of women who do decide to migrate. Women more frequently hire smugglers and are less likely to access migrant routes and resources, such as public trains and migrant shelters. Since traveling alone most often exacerbates the risks women face, the shift towards the caravan structure was revolutionary for women – providing them with the safety and support necessary for survival. While this has not eliminated sexual and gender-based violence along the journey, these community structures have offered protection and led to growth among female migrant populations.

Migrant adaptations for survival may be superficially misconstrued as camaraderie, but should be recognized as more. The act of migrating as a group was a reclamation – moving away from the treacherous grips of traffickers and individual passages that often lead to abuse, rape, and murder. With community protection mitigating these risks, vulnerable individuals are more likely to survive and thrive. This has created more opportunities for women to be active members of migration efforts and recognized leaders within the community, so that women like Gabby are able to shape resources in ways that governments are not. Refugee-led spaces, such as the shelter and the kitchen, model the transformative opportunities that emerge in low-resource settings. El Comedor is a vital continuation of the visibility and shared resources offered by the caravan, one that exemplifies the space that women have carved out for themselves.

The community-led origins of the kitchen have served as an entry point for women to claim and establish their role in Tijuana’s growing migrant community. For many, this has re-framed what the migratory path looks like and where they hope to plant roots. Now that she has a space to call her own, Tijuana feels more like home to Gabby. She feels deeply connected to the people around her, who, despite being from different countries, are her community. She notes that she’s not holding her breath for asylum in the United States, and is considering staying in Mexico. She’s not the only one. Some of El Comedor’s diners are beginning to see the kitchen, and Tijuana, as their new destination. “Being here, I stopped looking at the United States as the only dream. What makes this place special is the people,” Gabby says.

Gabby’s words ring true as the kitchen team gathers on the rooftop to celebrate El Comedor’s one-month anniversary. People turn on music and throw smiles down at the kids playing in the street, grateful to have finished another full day. The kitchen faces south, and from the rooftop, there is a panoramic view of Tijuana’s central arch and the sloping green hills, colorful favelas, and coastline extending in the background. As the sun sets and the hills begin to light up, no one is looking back at the border.

“Estados Unidos no es el único sueño.” The United States is not the only dream.